I undertook my annual pilgrimage to Bristol Comic Expo on the 22-23rd of May, during a heat-wave that was very unkind to the hordes of my nerdy people in attendance. It was a fun albeit sweaty event in which many comics were signed, many panels attended, and many obscure pop culture references thrown around. 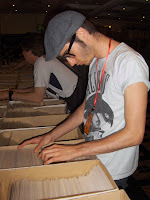 Aside from picking up some Madman and Spirit back issues (and sporting a fetching laminated lanyard), I bought Jonathan Ross and Tommy Lee Edwards' new comic Turf and hounded Kieron Gillen after his Marvel panel talk until he signed his first issue of Thor.
Dave Hitchcock was giving away artwork for his new graphic novel Madame Samurai which looked incredible, and I was lucky enough to discover some new indie publishers that I'd never heard of, among them Atomic Diner who can be found at http://www.atomicdiner.com

Many have complained about the change in venue and drop in sponsors for Bristol in the last few years but the convention will always be important for me as it was my first convention, one I have travelled to visit for many years. It remains the safest place to geek out every May. I can't wait until next year.
Posted by Owen Michael Johnson at 08:33