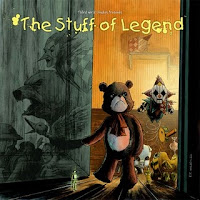 “But the years came and went without bringing the careless boy; and when they met again, Wendy was a married woman, and Peter was no more to her than a little dust in the box in which she had kept her toys. Wendy was grown up.”- Peter Pan

Stuff of Legend is a comic book about adult dangers imposed on the world of childish things. The book ties into a long tradition in literature and film, in which the objects of imaginative play are imbued with human personalities, wants, and desires; where fantasy is given a reality. Most notable examples are the movies The Pagemaster ,Toy Story and The Neverending story (itself a children's novel.) These works often form an effective metaphor - Toy Story concerns being replaced and unloved; The Neverending Story is about the collapse of imagination and child-like hopes.

The effective element in The Stuff of Legend is its period setting. The decision of writers Mike Raicht and Brian Smith to set the book during World War II is an important one in showing that the marvellous events of the book are a direct expression of one little boy's perception of a conflict his father is absent fighting. This gives the book a dark, hopeless edge that raises it above most stories of its ilk in which the main players' motives are selfish and altruistic. Here the toys fight to save a boy, the opening 'Battle at Brooklyn Creek' hinting at Omaha beach landings. This is subversive stuff for a book about a stuffed bear in a bowtie. The complex Percy - the boy's piggy-bank - is a fascinating character. Unique among the company in that his loyalty will be rewarded when the boy "breaks me", his allegiance is always in question. In another character, the fearless soldier 'Colonel', we see the boy's most unfettered desires to see his father realized. This is a book about loyalty to friends, a boy, a country.

The art of Charles Paul Wilson III is wonderfully whimsical and traditional in the opening section, recalling a melancholy storybook. Brilliantly, the crude, expressionless toys are replaced with living, dynamic counterparts when they enter The Dark (surely a fantasia version of Nazi-occupied Europe). The artwork evokes early James Jean and Dave Hitchcock, artist of Madam Samurai.

That this is a great, great book, is perhaps most evident in its simplicity. I enjoyed it but was not blown away once I closed it. The more I considered what it was saying and where it could potentially go (the next chapter 'The Jungle' is currently shipping) I understood what a rare find it was. Get 'The Stuff of Legend Book 1: The Dark now. There is nothing like it on the stands.

For fans of: The Neverending Story, Fables, Toy Story.
Posted by Owen Michael Johnson at 06:49