This starts out as a convention review and deviates into ruminations on the creative impulse. You have been warned. Get out, while you still can.

Yesterday I hauled ass to Newcastle for the annual Canny Comic Con - held in the City library. After the mega-event that was Thought Bubble, I have to admit I didn't expect an explosive show out of this one. Boy was I wrong.

With winter raging on, this gig - hosted by the wonderful team of Alex and Stacey Whittle - was a genuinely warm surprise. This was a free event. This was a small event. But this was by no means a 'cheap' event, or one of limited quality. There was an authentic joy about the days proceedings.  It all seemed...well, effortless. At least, that's how it appeared. A lot of hard work went into making it so relaxed and friendly. To Alex and Stacey, as well as all the staff who volunteered, you have my highest recommendation. 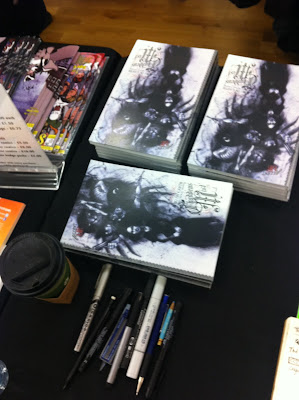 Let's put this straight up front. This was my first solo show. Previously I had hitched a ride on the Accent UK  circus-train. They are the best. All my con experiences with them have been astounding (and freeing, as I was able to dementedly flit, bat-like, around the other stalls). Although I was primarily there to sell the company's book, at Canny Comic Con I was on my own.
I. Freaking. Loved. It.
This was a great deal to do with having such talented and supportive table-buddies like Tom Boyle, Gary Bainbridge, Andrew Waugh, the ever genial (and forever smiling) Daniel Clifford (seriously, the guy's teeth are perfect) beside me.

Manning a table alone is HARD WORK. You don't get to coast. You can't wander off to stare at other people's comics (at least, not for the most part). You are there to meet the people you do all this for: comic book readers. Although I've been writing comics for a while, it wasn't until the last couple of years that I felt it was time to actively sell my material to others. This was partly to do with self-confidence (first attempts were, and should be, pretty embarrassing for creators who seek to develop) and partly to do with fear. I can't express accurately how energizing it is to have others lay down money to read your work.

Despite refusing to get my hopes up, the copies of Thaddeus Mist I brought sold out! Thanks must go to the last-minute-purchase gentleman for my clean slate. People seemed to really dig the book, many commenting on the design by Danielle Horton. My favorite response seems to come from Northern folk: "It's like a proper book, isn't it?"

I also secretly loved sketching the Turtles, Ben 10 and Dennis The Menace for the young ones. There were loads of them! Many of them weren't old enough for our book, but it's really encouraging to see children at shows like this. They are the ones that are going to be buying the best-selling comics of the future (with jetpacks!) after all, so best to get on their good side. 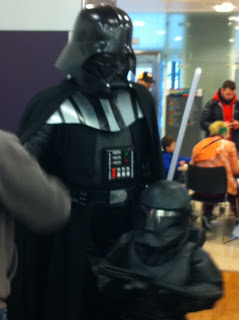 Brilliant chats were had with Al Ewing and Bryan Talbot, both of whom offered sage advice.

One of the highlights, however, for me (and this is totally unrelated to comics) was meeting a real-life Thaddeus Mist -  Dr. Charles Davis: international adventurer and gin sampler (as his facebook page will attest) - the nom de plume of reenactment agent Andy Davis. Shortly after the show he left his condolences for the death of a fellow eccentric. He was a joy to wax lyrical about reenactment (the trick, with the Victorian's is to wedge one's tongue firmly in one's cheek), fiction and the British Empire (a topic synonymous -at least in my head - with my grandfather, who traveled in search of Bengal tigers at a young age). As I type that sentence and think on that meeting it appears to perfectly symbolize what making Thaddeus (and writing for me in general) is about; that weird blurring of the lines between fact and fiction - what we live and what we choose to create. 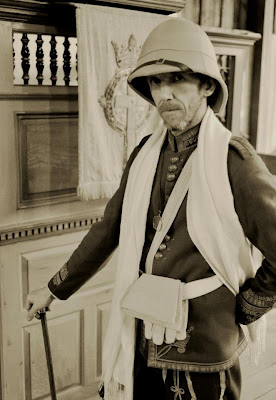 Without getting all soft and cuddly about it (I'm a sickeningly sentimental blogger at the best of times) I believe art and writing are the only forms of practical magic currently available us - beyond the realms of scientific discovery. Meeting a flesh and blood character called Charles Davis, whom I am convinced would have sat down for opium and biscuits with a character I created, gives me a strange shiver of delight. The wall between our two worlds is only so thin...


Posted by Owen Michael Johnson at 13:11