The last week or so has seen everyone work like true champions in order to get Raygun Roads ready for consumption.


The book is currently with Stuart & Sharron Gould of UK Comics and bound for its launch at the Lakes International Comic Art festival in Kendal next week. Having heard from Julie how swept off their feet everyone's become with this show I'm convinced it's going to be something special and the hard work gone in will pay off. I'm also incredibly proud that the element of the festival I was privileged enough to help shape in a very small way, the Comics Clocktower, is going to be open to the world!

Without further ado, here are the details of my appearance at the show. 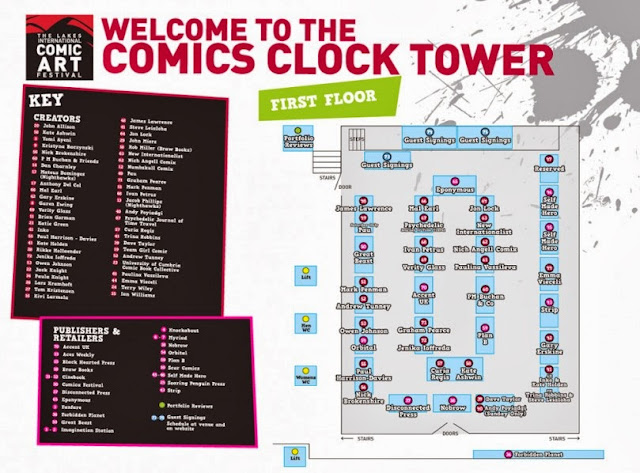 You can find me all weekend on the 1st Floor TABLE 53 between some of my favourite people in the world, Orbital Comics, and Andrew Tunney who has produced this brilliant limited edition Raygun Roads print, which will be available to purchase all weekend. 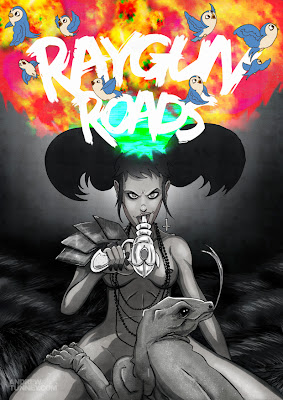 Myself and the wonderful and horrendously talented writer/editor Lizzie Boyle will be discussing a broad spectrum of topics in this event on Sunday: artistic work in the context of its geographical point of origin; magic and the otherworldly and how many stories of this kind are couched in a remote or countryside setting; distribution and location in small-press comics; isolation and creativity; history and relevance, and . And we'll probably talk a lot about ourselves and our own work. Just 'coz.

There are still some tickets left for this event so if you fancy hearing us wax lyrical, give the Brewery box office a call or order online.

If they'll have me I also plan to drop by the Accent UK and Disconnected Press tables to sign copies of 'Who On Earth Was Thaddeus Mist?' and Disconnected Vol. 3 respectively, the latter of which is available for the first time at the event.

A flying visit before I hit the trail back to London. Store-owner Tommy has always been super supportive of my stuff so will be the first to receive copies of Raygun Roads. I'll be scribbling between 11-12 so if you're stuck for something to do after the festival drop by before disbanding across the country. Imagination Station is a fantastic comic store to visit if you haven't done so yet.

Hope to see many friends old and new over the course of the weekend!

Posted by Owen Michael Johnson at 12:22