Who On Earth Was Thaddeus Mist? and other pressing questions... 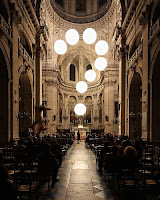 Being that time of the year, this was going to be a year in review post but there is so much exciting stuff flying around right now that I want to talk about...so I'll do that instead.

I've been recruited into reviewing comics for the awesome Jim Schwitzer and the Tales From The Parent's Basement crew. So far the process has been nothing short of great fun. It also gives me a chance to read more comics and keep my writing sharp during down-time. My first review for them is the Oni Press graphic novel 'Guerilla's' and can be viewed here... http://talesfromtheparentsbasement.com/reviews/?p=563

A new prose story has lodged itself in my brain and, while it is foetal at this point, all arms and elbows, it may turn into something big. Time will tell...

Finally, I have been working for some months with Accent UK and I think I won't get in trouble for saying that I'm going to be editing their next anthology after Victoriana. It is some way off yet, so I'm reticent to give many details in case the whole thing falls apart in front of me, but the fully-collaborative graphic novel is entitled 'Who On Earth Was Thaddeus Mist?' I'm working with my favourite writers and artists in the industry on this one, among them award-winning creators Dave West and Marleen Lowe, as well as a slew of embarrassingly good talent. I'm very excited and honored to be working on it. More details soon.

Like any year there have been victories and losses, but on the whole things I had no clue were possible happened, and for that I'm very grateful. I met some truly great people, and worked harder than I have before on things people will see and things people will not.

I'd like things to keep getting better. Next year I want to defy gravity.
Posted by Owen Michael Johnson at 13:09