“You churn around in the drawer and pull out what catches your eye, bits and pieces drawn from movies and history and your own fancy, and make something new, something no one has ever seen or imagined before.”
-Michael Chabon, Manhood for Amateurs

Despite my fearlessness in childhood, it had taken three months to pluck up the courage to enter the first comic store I ever saw. I was ten years old.
A small place in the most notorious part of Carlisle, the Imagination Station was painted black and blood red, with a black chain-link grill perpetually covering the windows in an effort to deter thieves. What the criminals of the blue-collar backstreets of the North of England would want with Silver Age comic books – predominantly featuring men in spandex - is a question that would always confuse me. It looked more like an S&M palace than a comic store, and as mum drove our busted up old mini metro past I would stare, through fear and curiosity, out the window, only to be haunted by it as I followed mum through the bright lights of the department store in the city centre. Weeks later, I deemed myself brave enough to approach.

You could never see much through the metal grill encasing the comic store’s forbidden pleasures. Its appearance seemed as concerned with scaring people off as inviting in trade. Nestled amongst the pop culture memorabilia were model kits of Leather-face, Pinhead and company, characters with names which only added to my feeling of apprehension that I was fascinated by a culture that would send me tumbling down a fetish rabbit-hole. At the front of the window stood a resin maquette of an Alien creature designed by H R Giger. I was completely mesmerized by this statue. It summed up everything that drew me into the orbit of the place. It also scared the shit out of me. Like Imagination Station itself, it was macabre and gruesome, frightening in its promise of a world not for the squeamish, like sneaking downstairs to watch a horror movie mum had banned me from watching. At the same time there was something dynamic and exciting about that eighteen inch maquette. I guess I was fascinated by comics because they were a bastard art-form, at once freed and shackled by the tag that they were not, and never would be, mentioned in the same breath as fine art. Perhaps that is why those in the know defend their title so fiercely. It was like being there when Ziggy played the last show at the Hammersmith Apollo; in on The Comedian’s joke when Watchmen hit the stands. It was theirs and theirs alone, defiantly impenetrable, and a punk-rock fuck you to those that didn’t understand it.

Times change. It is a universal fact that the term ‘geek’ as it was used in the 1980’s, as a tag to categorize an individual in possession of a niche popular culture obsession, is now totally obsolete. I am a twenty three year old male from the UK and, as far as I understand it, hail from the LAST true generation of geek, born as I was in 1987. I grew up with Nintendo, Alan Moore and Star Wars already established as calling cards into a certain sphere of existence. I did not inherit a defensive attitude to that which I loved probably because it was handed down to me, rather than forged. I was granted ten minutes (ten WHOLE minutes!) to play Donkey Kong on my cousin’s SNES. I was in the playground when the Pokémon craze landed itself on BBC News. For my generation, we carried no nostalgia for a time when humming Zelda’s theme on an imaginary Ocarina had the power of a secret handshake. There was no golden-days romance because we were born with them behind us. I suppose it is easy for me to say it is snobbish and lazy to wear your geek credentials as the badge of a martyr, because for children of my age those barriers had all but been erased. 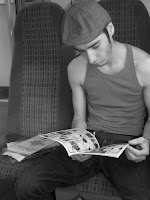 Great works, and indeed the nerd virus itself, can strike at any moment in our lives. My mother consumed Six Feet Under, the fantastic HBO show, at a rate of knots. My father has a room dedicated to Mongolian culture, movies, and art. I disagree that being an obsessive nerd is an issue of demographic or age, as if memorizing the dialogue from Jason and The Argonauts filled the air-time that girls would take up (I responded to Y: The Last Man - a text I religiously followed through university – precisely because I was interested in girls). Being a geek now, more than ever, is used to quantify the mode of consumption rather than the content. For me, saying you loved a band before they were famous is self-congratulatory when, in fact, we should be proud of that band for winning over new fans. Instead of telling someone you ‘liked them before they were big’, try asking them what their favourite tracks are. No lasting piece of art can sustain itself without consumption, without disagreement or debate. It doesn’t matter if it’s a national phenomenon or a specialist convention with two attendees, popular culture creates connections between people who share similar interests. Once it ceases to do that, and warring tribes fight over possession, it is rendered useless.

What concerns me more is the generation following mine. There was a certain amount of scrappiness to the Star Wars trilogy, a vagueness that allowed those viewing the universe to populate it with their own imaginations. That was something I found liberating. The director of Empire Strikes Back Irvine Kirshner died last month, his death bringing with it fond memories of hurling myself through a snow day to escape the metallic stamp of AT-AT walkers. Anything that even remotely looked like a sword was swung around to the sound of blowing air through your cheeks. My worry is that technology has removed the option of audience engagement. CGI, however wonderful, cannot replace that intangible charm of seeing Harryhausen’s fingernails in the clay. That is not nostalgia speaking, but a hunger for less sanitized, adult-approved and quality controlled worlds that children are given. We shouldn’t be patronizing by having fluffy creatures tell fart-gags in a vacuous animated film, nor should we be designating a ‘child-friendly’ line of comics. We need to create a universe as vast and detailed as Tolkien’s or Lucas’s in which they can get lost. Thank god, then, for Pixar and Phillip Pullman. We are starved for good stories, deluding ourselves that we can fill that void with visual stimulation which, as satisfying as it can be in the moment, does not make us fall in love.
To me, Denny O’Neill and Neal Adam’s run on Green Lantern had as much to say about the human condition as the Shakespeare we trudged through on endless school afternoons. Watchmen was my Ulysses; intoxicating but incomprehensible at fourteen, life-affirming on the journey through college. The reason these movies, video-games, comics and (insert any pop culture you were ever passionate about here) were so obsessively loved is that we built our hearts around them. Stories are something we have always and will always need. That is how new generations of film-makers, writers and musicians become inspired.

The key to the underground has been handed to the surface dwellers and the blame and thanks for that largely falls to the internet. After all, you can read the synopsis for every movie, every T.V. show, every book you desire. This has removed a certain facility of our brains designed for coming to our own conclusions about what we consume. As a writer, I also worry that this removes the ability to re-interpret and re-mould those inspirations into new art. But I look to optimism. The blame for a barren culture falls to those who create, and those who consume. Simply, if we stop watching terrible movies they will cease to be made. I firmly believe that the imaginative space of children only shrinks if they stop being imaginative. In the same way, it may be a point that the internet makes it harder than ever for struggling artists to be heard. Interesting thought, but that forces young artists to be better, to work harder, to stand out from the crowd. Edgar Wright created Scott Pilgrim, a movie about being a kung-fu nerd. Final Fantasy has written an album about love through the eyes of a gamer. The lead singer of My Chemical Romance has a book inspired by his love of the X-Men. It is wonderful that any kid with a Mac and editing software can make a film. Now if that kid were only talented enough, he or she could conquer the world.

There will forever be niche interests. Just as Shaun of The Dead becomes required viewing for Quentin Tarantino and Kevin Smith, forever moving out of obscurity, so a small comics label from Sao Paolo quietly creates a masterpiece in the making. The joy of the nerd comes from the knowledge that there will always be someone out there carving away at their hobbies and looking to get out of the basement.
Posted by Owen Michael Johnson at 14:22