Who On Earth Was Thaddeus Mist? 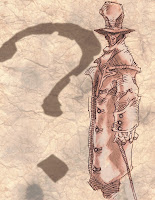 I'm delighted to announce more details for the next big comic project I'm working on for Accent UK.

At the funeral of a mysterious and enigmatic gentleman, newly-wed Zelda Mist mourns for the husband she never knew, for Thaddeus Mist kept a life-time of secrets. In her grief she approaches each funeral guest to discover details of the strange life he lived.
As they each tell the tale of Thaddeus Mist their flawed memories and individual imaginations shape their stories into mundane fictions and fantastical truths. These accounts disgust, scare, entertain, and inspire her in equal measure, but it falls to Mrs. Mist to decided which version of her husband lived. So...Who On Earth Was Thaddeus Mist?

Who On Earth Was Thaddeus Mist? will be a multi-creator graphic novel written and drawn by the freshest new talent in UK and US comic books.

I'm excited about this even though I've been working on it for a long time now (work began roughly April/May). It's a strange little beast, part regular anthology, part concept album. More details will surface (such as the artists working on the book) as and when through either myself or Accent UK, but I can reveal which writers I've been working with. It's quite a list.

I'm humbled to be working with Dave West (Eagle award winning writer of Whatever Happened To The World's Fastest Man?),
Marleen Lowe (also an eagle-award winner, Marleen will be illustrating her own contribution), novelist Max Deacon, Ben Dickson (writer of Falling Sky and Children Of The Moon, Andrew Cheverton (writer and co-creator of the West series), Jim Schwitzer and Mark Douglas (8AM anthology, Zombies 2, and Tales From The Parent's Basement alumni). The mega-talented Mal Earl (who provided the teaser image above) is on conceptual designing duties.

Stay tuned for more such as breakdowns of the editing process (which has been a very different experience for me), concept art, and news!
Posted by Owen Michael Johnson at 12:00