The artist team on 'Who On Earth Was Thaddeus Mist?' have been working hard to bring the whole thing alive in recent months (and a comic book is never really alive until an artist magics them out of thin air with just paper and ink). I thought I'd take this opportunity to share how excited I am. Every single one is knocking it out of the park. 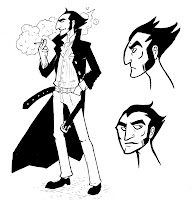 Over at his blog, the brilliant Grant Perkins has done a marvellous pin-up for the book.
http://thegrantperkins.blogspot.com/2012/03/grey-britain.html

I believe the plan is to release a smaller volume of pin-ups, process notes, and other juicy material to coincide with the release of the main graphic novel. There were so many great artists and friends that for whatever reason (scheduling, length etc.) couldn't make it into 'Thaddeus Mist' so it would be great to still have their work feature in some way.

Also over at Rhys L Reed's blog you can see the thumbnails for his contribution to the comic. Find those here: http://applejackandreed.blogspot.com/

Rhys I met at Thought Bubble last year and knew right away that he'd be great for this. His art is just amazing and gives a texture and whimsy that the book was lacking before he jumped onboard. 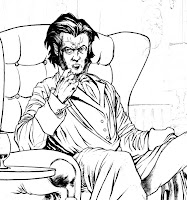 Conor is the main artist on Thaddeus Mist (our narrative frames the other stories - almost like flashbacks). It's been a true joy working with Conor, and so far I've been humbled by his work-ethic. Everything I've thrown at him art-wise he has embraced, and even brought more to the table than I'd imagined, making suggestions and making even a hack and a pretender like me look much, much better than I am. On top of this, Conor's stepped in to oversee the art direction on the book, in order to make sure the transitions and stories mesh together correctly (no easy task when there are so many artists involved in telling one continuous story). Follow the dude on twitter (@pencilmonkey), read his blog, generally worship at his feet. He is a damn fine artist.

Thaddeus Mist features in issue 374 of Starburst magazine (The Walking Dead cover) and there will be some attention given to Accent UK books in an upcoming issue of Comic Heroes, thanks to Rob Power. Comic Heroes is a great magazine I've been reading for a while so it would be nice to have Thaddeus Mist feature in there at some point in the future.

We're still shooting for a tentative release at the end of summer (but with comics, I've learnt, many things can and will go wrong. In short, don't hold ya breath, folks! If the Mayans are right we'll all be toast before this baby hits the racks!)
Posted by Owen Michael Johnson at 12:12