In search of Golems... 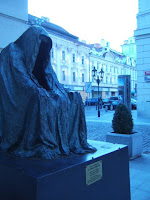 It has been way too long since my last blog post. So now's a good a time as any.

I skipped over to Prague in February. Having worked on 'Who On Earth Was Thaddeus Mist?' for a good few months it was time to take a break.

Prague has a lot of history, and it was a thrill to get to know it a little. There is a great cafe/bookshop called The Globe that does the best coffee and apple strudel I've ever had. If it were not frowned upon by nutritionists I would do this 24 hours a day. Without even stopping.

We went to the National Theatre to see a Czech play (yes, it was a magnificent building - no, I didn't understand what the actors were saying), tried to find the landmarks mentioned in my favourite book: Michael Chabon's 'The Amazing Adventures of Kavalier & Clay', took pictures, and generally tried to blend in (not easy when your pronunciation of Czech sounds like you're coughing up a particularly troublesome furball). Being a fan of Mike Mignola, witches and general spookiness, I got a huge kick out of the Charles Bridge... 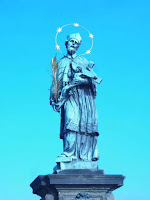 ...and the Old Synagogue, in the rafters of which the famous Rabbi Loew is rumoured to have hidden the Golem, monstrous and enchanted figure built of clay taken from the banks of the river Moldau.. 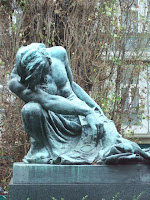 ...but the Nazis were evidently shit at looking, because in every tourist cavern my girlfriend found a million of the little devils in the form of adorable keychains, notepads and other delightful novelty items.

Prague's a great friendly city, and I left completely inspired.
Posted by Owen Michael Johnson at 11:26