The day I made a comic book convention.

Well that was intense...

On Saturday August 18th all the hard work of the last four months paid off when Megacon Carlisle lifted off the ground. I was one of three organizers for the event (bookseller Levi McGinchley and events wunderkid Graham Barke were representatives for Waterstones, who hosted the event in association with Diamond). 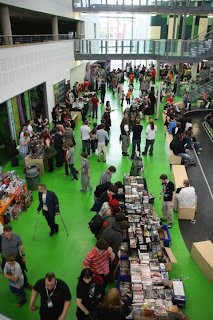 Held at the Richard Rose Academy in the centre of border city Carlisle, it was our intention to unite the various tribes of popular culture fans for one event. This was without doubt the biggest thing I've ever put together, but after supportive friends had encouraged to 'just do it', I found the experience exhilarating. I will be writing more extensively about Megacon Carlisle with ComicBooked but this is my personal blog, so you'll be getting my personal response.

We made a few mistakes which I'm sure will be rectified for next year but I believe - on the whole - myself, Graham and Levi did a good thing, both for ourselves and the area. From the reports I'm gathering, a lot of people had a great day. 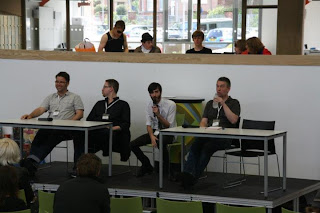 Highlights for me included moderating a panel starring artist Sean Phillips (Fatale, Incognito, Marvel Zombies), former 2000AD editor Andy Diggle (The Losers, Daredevil, Green Arrow: Year One), and Jim Alexander (Gabriel, Birds of Prey, Amongst The Stars). These were our headlining guests so it was incredibly nerve-wracking to step up to the plate and try and get them to open up and  divulge some industry secrets. It really was an honor.


I also got to catch up with Stacy Whittle (SFX, Into the Woods anthology) to record an interview for her podcast which I greatly enjoy. Due to having so much to organize I didn't get to catch up with everyone I wanted to but those creators who I admire as professionals and friends proved a joy in the moments I got to chat with them - writer/illustrator Mal Earl; Sha and John from Black Hearted Press; Colin Bell, who's currently working on the brilliant Detective Space-Cat; my friend and colorist Matt Soffe and a hundred and one other amazing comics professionals who I'm sure will be furious I've forgotten as I type this. 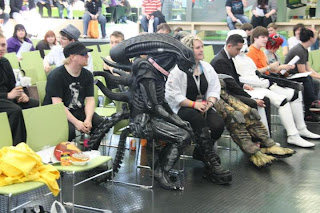 As a side-note, you can always rely on cosplayers and for their dedication and energy at any convention. 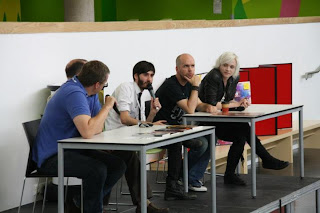 My favourite part of the whole day was seeing my friends from Disconnected Press and Accent UK. Novellist and 'Thaddeus Mist' contributor Max Deacon and Disconnected's Conor Boyle (who is also my collaborator on Thaddeus) joined Colin Mathieson, Dave West and myself for the Accent UK panel.

Having previously felt the comic-book pulse of Carlisle I knew there were some wannabe creators out there (some of them still in school!) and so we tweaked our discussion to how to create for yourself and begin down this beautiful but treacherous road that is making comics. Having so many turn up to this panel, consisting of my favourite writers and artists, was humbling, and it remains the highlight of my comic career so far. 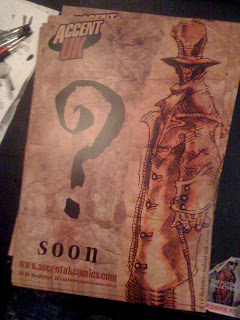 We also gave out some Megacon exclusive Thaddeus Mist prints designed by Mal Earl for those cheap bastards that just wanted free shit! I jest!

At which point Accent UK sped off to sell lots of books and Conor sketched until the sun was going down. After the convention a few of us his The Circle bar to talk comics and argue about whether Raiders is better than Temple (Max: Temple, everyone else: Raiders). 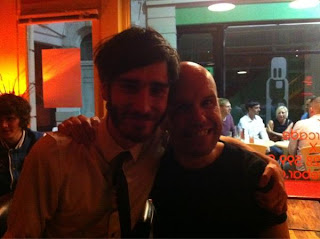 Lizzie and Conor Boyle are true heroes of mine, and they give me hope that this industry is not the poisonous snake-pit some have reported, but an arena for craftsmen and artists, who work hard and play hard (I'm billing them both for paracetamol in the wake of my hang-over). In short, good people who make comics all day.

I personally want to thank every single person who made Megacon Carlisle possible, from the biggest artist to the dude who drove the Yu-Gi-Oh bus; students like Conor's superhero gang who helped lug stock and attend Richard Rose, to Tommy at the Imagination Station comic store on Bank Street for publicizing the event months before without ever seeing reward. From me, thank you all. 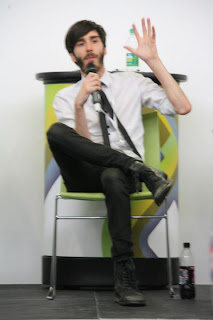 I wasn't getting paid a penny for my work by Waterstone's, but financial reward (perhaps foolishly) wasn't my main motivator for staging Megacon Carlisle. Comics kept me alive when I was a teenager living in a village just outside Carlisle. Thanks to the support and allowance granted by my parents I would make weekend pilgrimages from my cottage in Kirkoswald to the not-so-bright lights of the city to pick up my weekly stash of comics from Imagination Station. These first formative experiences are chronicled in my article 'Welcome To Planet Nerd' which can be found at Tales From The Parent's Basement


It was on these train rides to my comic book treasure that I would find chance encounters with other comics fans like Ian (who I was delighted to bump into at Megacon after literally ten years had passed!). We would debate about how Batman was going to order the chaos of No Man's Land; how Ultimate Spider-Man was, like, our generation's Spider-Man!; how much we just heart-breakingly, passionately loved comics. Cumbria, for those who don't know, is an incredibly rural area; villages miles apart, attractions scarce. It was 10-minute conversations with other kids about movies, music, comics, EVERYTHING that made school more bareable, self-harm more preposterous, life less painful, as if someone had taken to printing multicolored dots all over it and plastered it with ten foot high letters so that each bully-punch came with a KA-POW and each chance encounter with that girl you kinda-sorta fancied at school was laced with Poison Ivy pheromone.

That's why I organized Megacon. To make other young kids (and they made the convention for me) feel like they weren't alone and that they should have a comic collection if they need one.

Posted by Owen Michael Johnson at 06:42