'Who On Earth Was Thaddeus Mist?' launching at Thought Bubble! 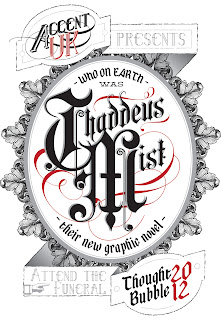 It's been a long, wonderful road. The funeral for Thaddeus Mist arrives at Thought Bubble in Leeds for the arts festival on the 17th-18th of November. We're just putting the finishing touches to the book, and it is looking utterly gorgeous. Also, the first volleys of serious publicity are getting under-way, beginning with the quarter page ad (above) that will run in the premier issue of Offlife Comic   - a free (and brilliant) sequential comic anthology due to drop in comic stores, arts cafes and other hip emporiums in the next week or so.

As anyone involved in making their own comics knows, the most important thing (after getting the stuff finished) is ensuring your book is on the radar, in the hands, on the brain, of THE WORLD!! It takes a lot of time, effort and energy to do this but it's worth it for those supporters who turn up at signings, order the books, and talk about the work. Long and short of it, conventions are a banging excuse to make new friends and catch up with old ones!

Towards the end of this month the Accent UK crew and myself will be mailing PDF copies to contributors for a final proof-read, followed by our friends at podcasts, blogs and press in the UK and abroad, near and far! If you are such an individual get in touch with us and we'll hook ya right up.

My October is to be devoured by the final push but I'm ridiculously excited to hit Leeds and finally bury this sucker!