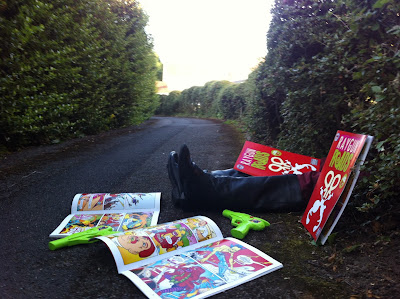 You think it's all a Death-Trap but the Death-Trap is you,
Buck up, Rogers, you're flying don't be blue.
- Raygun Roads & The Kittlebach Pirates, The Infinity Loop Death-Trap of Ullysses Pomp

HOLLA, FREAKS AND FIREBRANDS. IT'S TIME FOR SOME FILTH.

The 22 page limited edition ashcan copies of Raygun Roads have arrived, and they've only gone and knocked this fellas boots off! Madness.

For you morons that ain't heard of this book yet, here's the essentials.


Raygun Roads is a psychedelic science fiction comic concerning an imaginary pop-culture icon who – along with her cosmic punk band The Kittelbach Pirates – kidnaps Vince Paradise; the teenager that concocted her.

Exploding through the wall of the job-centre in their Suicide Machine, The Kittelbach Pirates rescue Vince from murder at the hands of his personal spiritual virus, D-Void. Raygun and Vince take a road trip through his psyche with the intention of assassinating Ullysses Pomp – head of D-Void and mastermind of The Infinity Loop Death-Trap, a mechanism with the power to destroy all teenagers.

A full-colour flip-book, Raygun Roads & The Infinity Loop Death-Trap Of Ullysses Pomp is our love letter to vinyl records, outsider ‘beat’ culture, and the transformative power of pop music. It’s a satire on the state of youth unemployment and the government’s failure to take responsibility.  It’s just a piece of candy-floss nonsense.

Do you feel neglected? Then it’s time to get infected!

Now that's out the way, look at them pages!!! 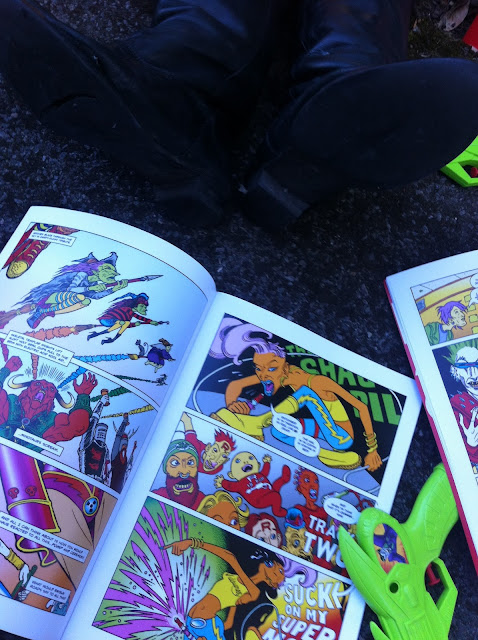 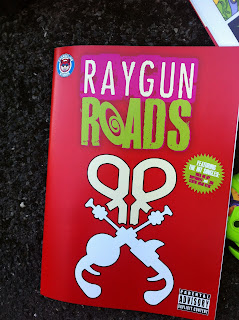 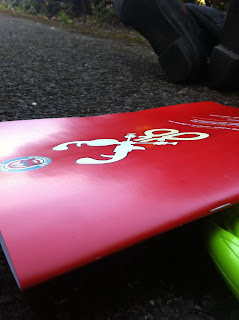 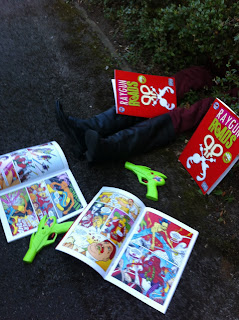 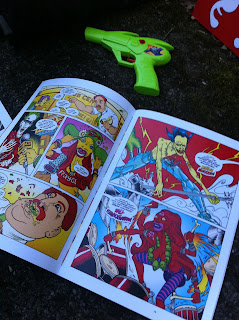 As always, a massive thank you to the endlessly professional and wonderful Stuart and Sharron Gould and everyone at UK Comics. They are proof that you can, indeed, polish a turd.

BUT WAIT: Who is the abundant talent behind this degenerate tripe I hear you cry? Well that would be INDIO, ANDY BLOOR, AND MIKE STOCK. 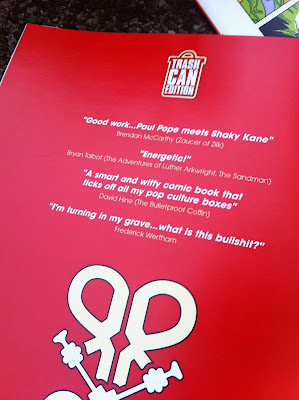 And we're ripping you off! It's not even the whole book! This is the first 22 pages of our story, which will be released as a full 49 page flip-album (just like vinyl!!) in September. But's it's only cheap (financially and morally), so stop complaining!!

DISCLAIMER: Those cheeky Scots get it first. This weekend you can grab a copy of the 50 copy limited edition run at the BONKERS AND BRILLIANT Glasgow Comic Con ! This comic is inspired by the Scottish underground scene (along with other things) to it's a spiritual home for the book. And they're the only ones that will have us.

NOT JUST THAT: this edition comes complete with an access code to experience the first track with it's original soundtrack at the RAYGUNROADS website. It's really a confusing experience and not recommended if you have epilepsy. Or taste.

Talking of the website, there are more talented muthas involved in that. Go and check it out to see unbelievable work by musicians Steve Harrison and Ben Johnston, animator Matt Sandbrook and super-genius criminal web-builder Inigo Saenz. The wider experience would simply not have existed without them and I must thank them. You, on the other hand, must blame them.

So, I'll see you in Glasgow?

Posted by Owen Michael Johnson at 14:19